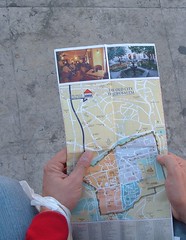 Last month I was in the opportunity to participate in the first official Ex Libris “Developers meet developers” meeting in Jerusalem, November 12-13, 2008. The meeting was dedicated to the new Open Platform strategy that Ex Libris has adopted. I already mentioned this development in my post How open are open systems?. Together with one of the other attendees, Mark Dehmlow, of Notre Dame University Library, I wrote a short report on this meeting in the IGeLU newsletter issue 2, 2008, page 21-22.

The intention of this event was that representatives from Ex Libris customer institutions that use Ex Libris’ Digital Library tools Aleph, SFX, MetaLib, and Primo and are actively involved in developing plug-ins, add-ons and extensions to one or more of these products, and Ex Libris staff involved in development of these tools, had the chance to meet face to face and talk, discuss and exchange ideas from both sides.

The political, cultural and social circumstances of the location of the event (about which I blogged some personal thoughts here) are such that I can’t resist the temptation of using them as a metaphor, although I am fully aware that the actual situation in Jerusalem is of course much more complicated. I apologise in advance if I unintentionally offend anyone by using the serious real world situation in an inappropriate way.

So, let’s give it a try: in Jerusalem there are a number of separate areas for different population groups. In general there are the Jewish western part and the Arab eastern part. But there is also the old city right in the middle, with Jewish, Arab, Christian and Armenian quarters. Besides that you can also see separate neighbourhoods within the Jewish part with different Jewish groups. And last but not least, right in the middle of the Christian quarter there is the Church of the Holy Sepulchre, with corners for almost all christian religious groups. Very fascinating and intriguing.

Although there are no physical borders between these areas, the complicated serious political, social and cultural circumstances prevent most people to visit their neighbours in their own areas. Now here comes the metaphor! In the world of informations systems you normally have a similar situation of “us and them”. Customers and users often think that providers of systems do not take them seriously and give them tools they can’t work with, and the other way around system developers often see end users as nagging bores, never satisfied and complaining about everything.
Customers and providers inhabit the same space, like Jerusalem, but do not cross the imaginary border to really meet.

This is why it is so remarkable that the “crossing of the border” between Ex Libris customers and developers actually happened in Jerusalem. Of course I immediately must add that Ex Libris has always favoured open systems for customers to use in their own way, and supports the international user groups, but an actual face-to-face meeting on the level of developers is something different.

From personal experience I know that it is very easy for situations to get out of hand if there is no real communication and no willingness for mutual understanding. That is why I think that it is absolutely vital that meetings like this can continue to take place. From the customers’ side the user groups IGeLU and ELUNA are fully dedicated to this goal, and I really hope that Ex Libris is also serious about it.

In this month of Christmas, Chanuka and Eid Al-Adha, let me end with the wish for better understanding on the personal, professional and global level!