I spent one day in the stacks of the off-site central storage facility of the Library of the University of Amsterdam as one of the volunteers helping the library perform a huge stock control operation which will take years. Goal of this project is to get a complete overview of the discrepancy between what’s on the shelves and what is in the catalogue. We’re talking about 65 kilometer of shelves, approximately 2.5 million items, in this central storage facility alone. 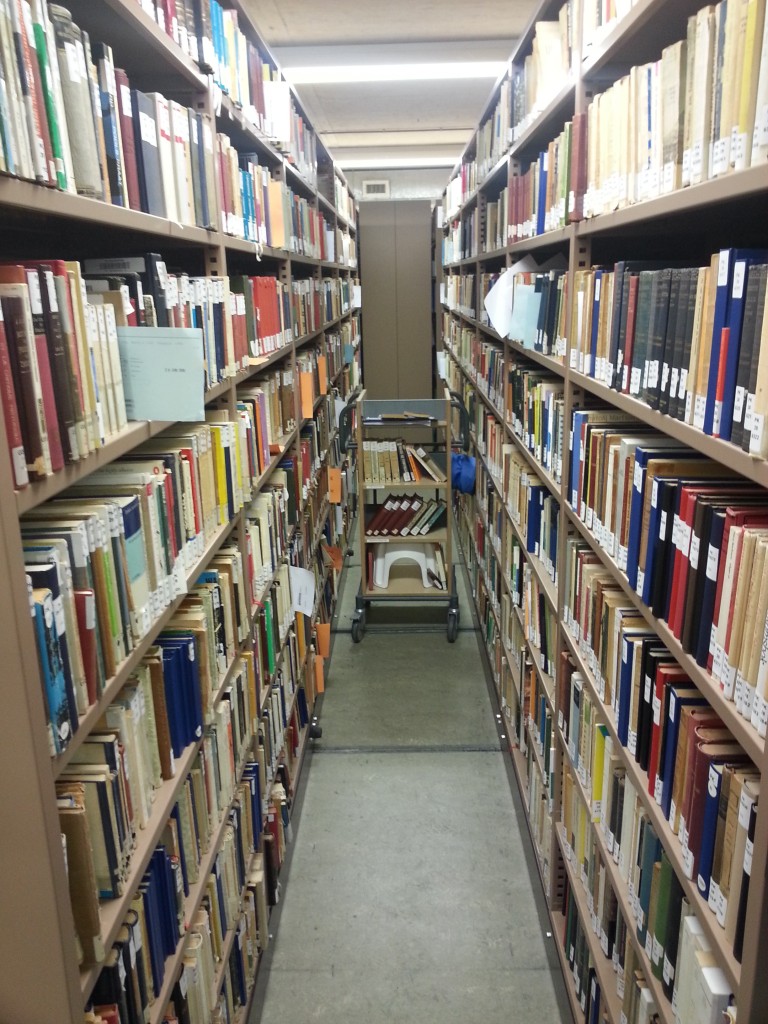 To be honest, I volunteered mainly for personal reasons. I wanted to see what is going on behind the scenes with all these physical objects that my department is providing logistics, discovery and circulation systems for. Is it really true that cataloguing the height of a book (MARC 300$c) is only used for determining which shelf to put it on?

The practical details: I received a book cart with a pencil, a marker, a stack of orange sheets of paper with the text “Book absent on account of stock control” and a printed list of 1000 items from the catalogue that should be located in one stack. I stood on my feet between 9 AM and 4 PM in a space of around 2-3 meter in one aisle between two stacks, with one hour in total of coffee and lunch breaks, in a huge building in the late 20th century suburbs of Amsterdam without mobile phone and internet coverage. I must say, I don’t envy the people working there. I’m happy to sit behind my desk and pc in my own office in the city centre.

Most of my books were indeed in a specific size range, 18-22 cm. approximately, with a couple of shorter ones. I found approximately 25-30 books on the shelves that were not on my list, and therefore not in the catalogue. I put these on my cart, replacing them with one of the orange sheets on which I pencilled the shelfmark of the book. There were approximately 5-10 books on my list missing from the shelves, which I marked on the list. One book had a shelfmark on the spine that was identical to the one of the book next to it. Inside was a different code, which seemed to be the correct one (it was on the list, 10 places down). I put 10 books on the cart of which I thought the title on the list didn’t match the title on the book correctly, but this is a tricky thing, as I will explain. 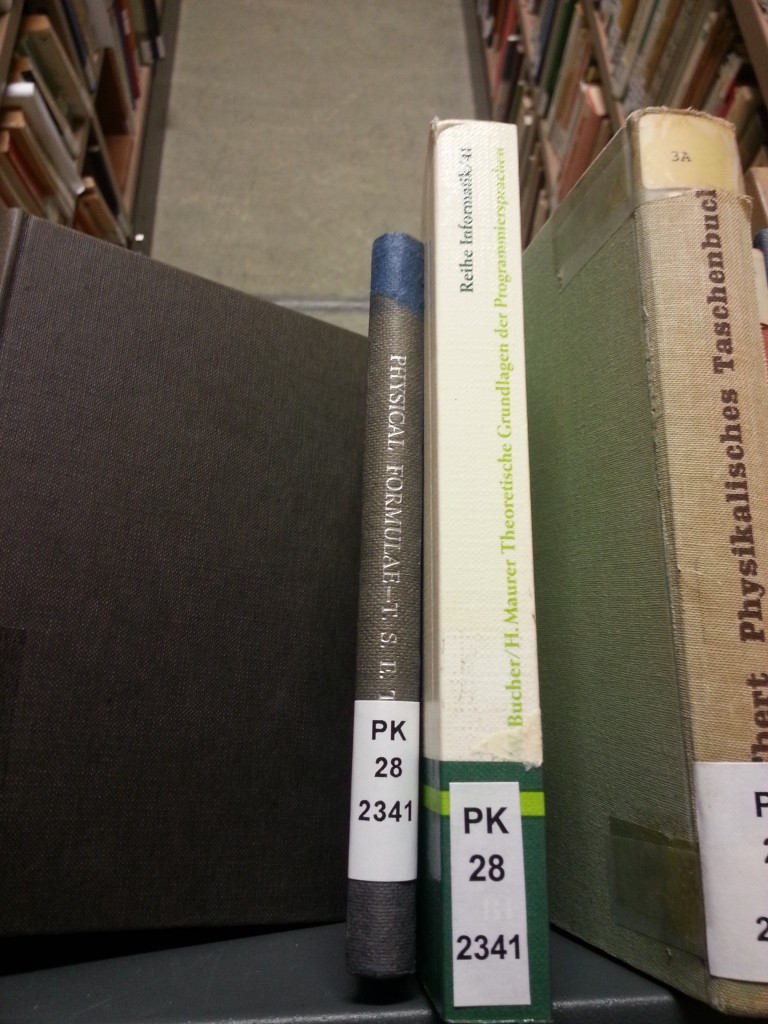 Title metadata
The title printed on the list was the “main title”, or MARC 245$a. It is very interesting to see how many differences there are between the ways that main and subtitles have been catalogued by different people through the ages. For instance, I had two editions on my list (1976 and 1980) of a German textbook on psychiatry, with almost identical titles and subtitles (title descriptions taken from the catalogue): 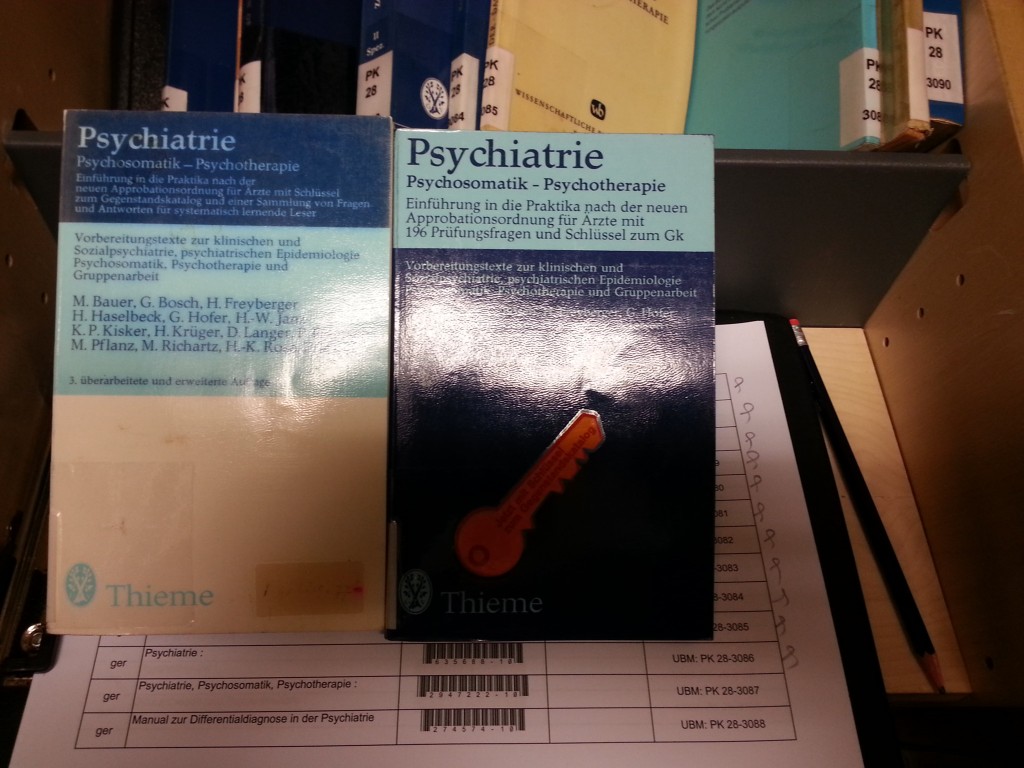 The first book, from 1976 (which actually has ‘196’ instead of ‘193’ on the cover), is on the list and in the catalogue with the main title (MARC 245$a) “Psychiatrie, Psychosomatik, Psychotherapie :”.
The second book, from 1980, is on the list with the main title “Psychiatrie :”.
Evidently it is not clear without a doubt what is to be catalogued as main title and subtitle just by looking at the cover and/or title page.

I have seen a lot of these cases in my batch of 1000 books in which it is questionable what constitutes the main and subtitle. Sometimes the main title consists of only the initial part, sometimes it consists of what looks like main and subtitle taken together. At first I put all parts of a serial on my cart because in my view the printed titles were incorrect. They only contained the title of the specific part of the serial, whereas in my non-librarian view the title should consist of the serial title + part title. On the other hand I also found serials for which only the serial title was entered as main title (5 items “Gesammelte Werke”, which means “Collected Works” in German). No consistency at all.
What became clear to me is that in a lot of cases it is impossible to identify a book by the catalogued main title alone. 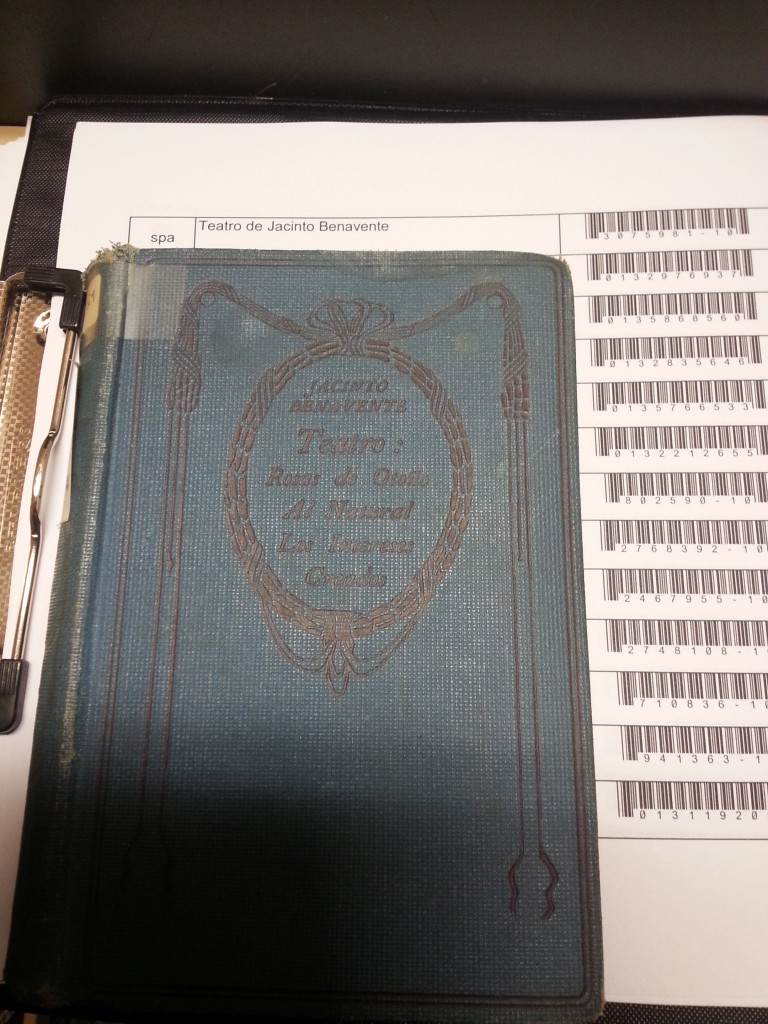 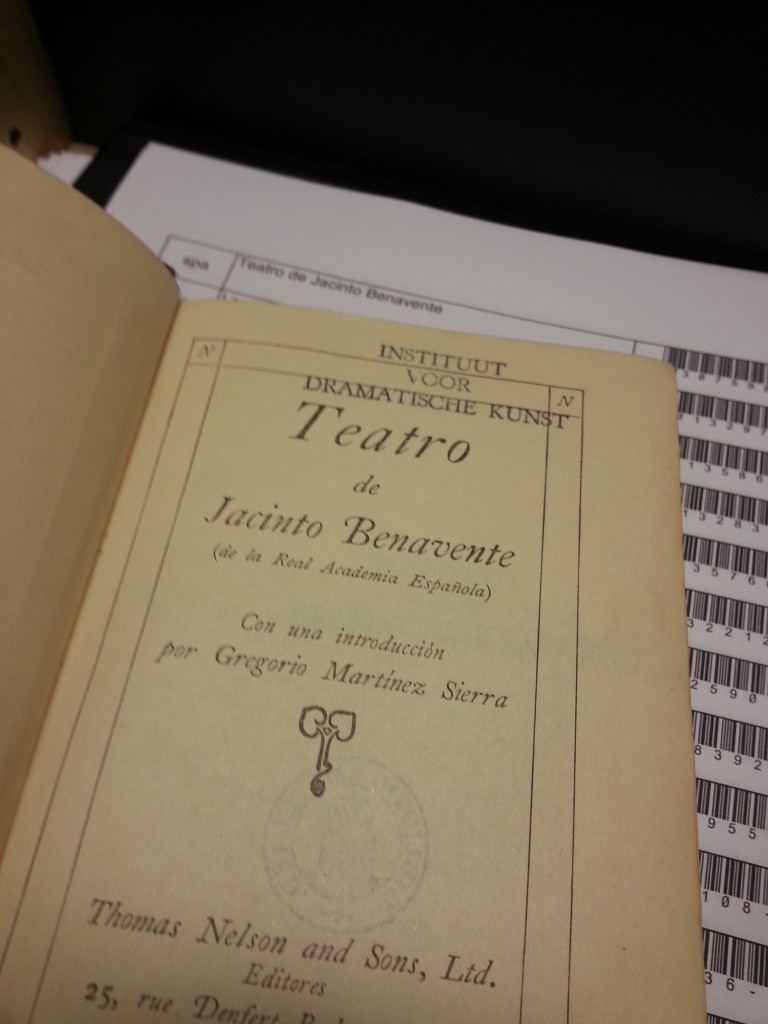 A lot of older books on my shelves (pre 20th century mainly, but also more recent ones) have different titles and subtitles on their spine, front and title page. Different variations depending on the available print space I guess. It’s hard to determine what the actual title and subtitles are. The title page is obviously the main source, but even then it looks difficult to me. Now I understand cataloguers a little better.

Works on the shelves
So much for the metadata. What about the actual works? There were all kinds of different types mixed with each other, mostly in batches apparently from the same collection. In my 1000 items there were theatre related books, both theoretical works and texts of plays, Russian and Bulgarian books of a communist/marxist/leninist nature, Arab language books of which I could not check the titles, some Swedish books, a large number of 19th century German language tourist guides for Italian regions and cities, medical, psychological and physics textbooks, old art history works, and a whole bunch of social science textbooks from the eighties of which we have at least half at our home (my wife and I both studied at the University of Amsterdam during that period ). I can honestly say that most of the textbooks in my section of the stacks are out of date and will never be used for teaching again. The rest was at least 100 years old. Most of these old books should be considered as cultural heritage and part of the Special Collections. I am not entirely sure that a university library should keep most of these works in the stacks.

Apart from this neutral economical perspective, there were also a number of very interesting discoveries from a book lover’s viewpoint, of which I will describe a few. 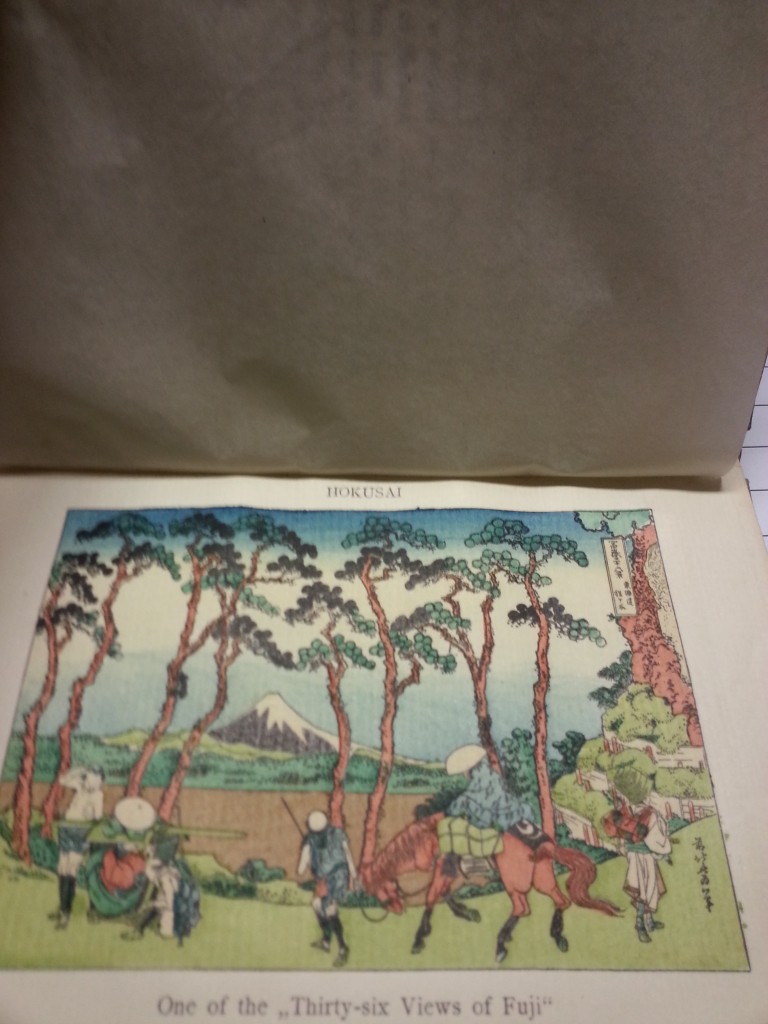 A handwritten, and therefore unique, item with the title (in Dutch) a “Bibliography of works about Michel Angelo, compiled by Mr. Jelle Hingst”, containing handwritten catalogue type cards with one entry each. 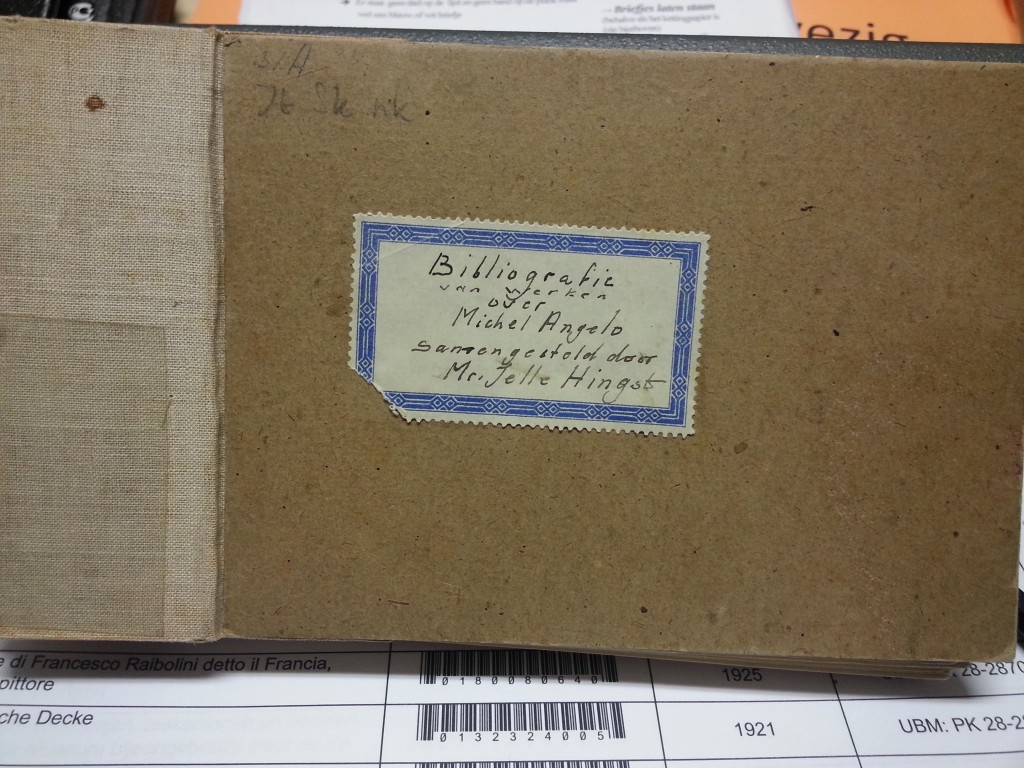 A case with one shelfmark containing two items: a printed description and a what looks like a facsimile of an old illustrated manuscript. 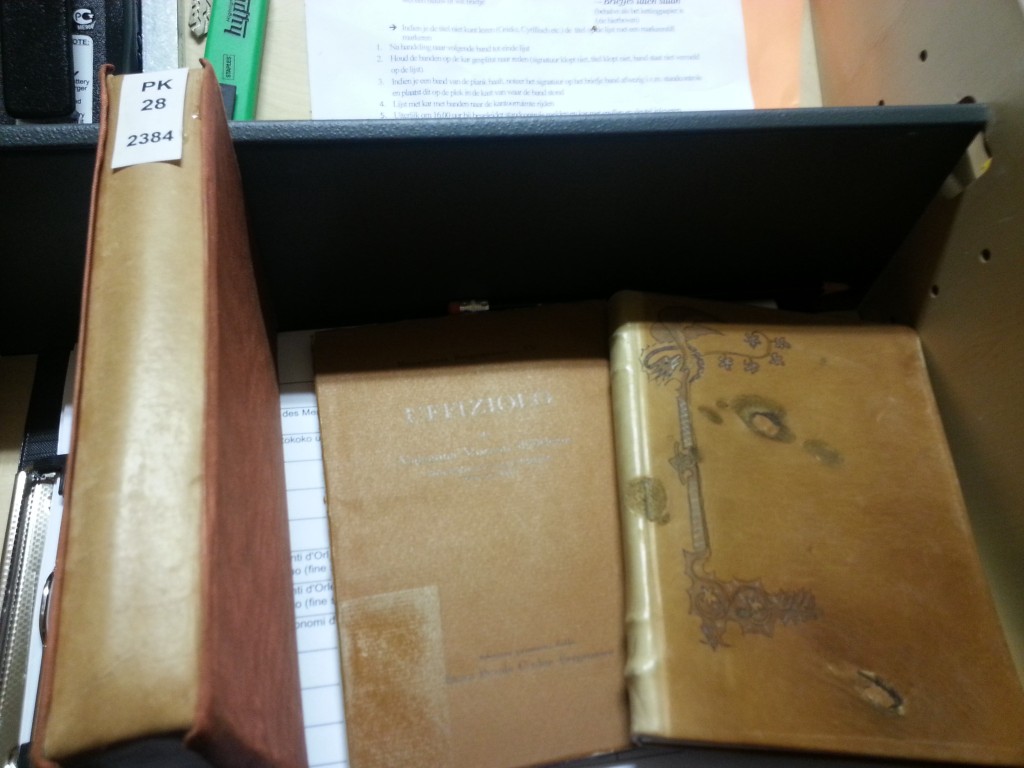 An Italian book with illustrations of ornaments from the cathedral of Siena, tied together with two cords. 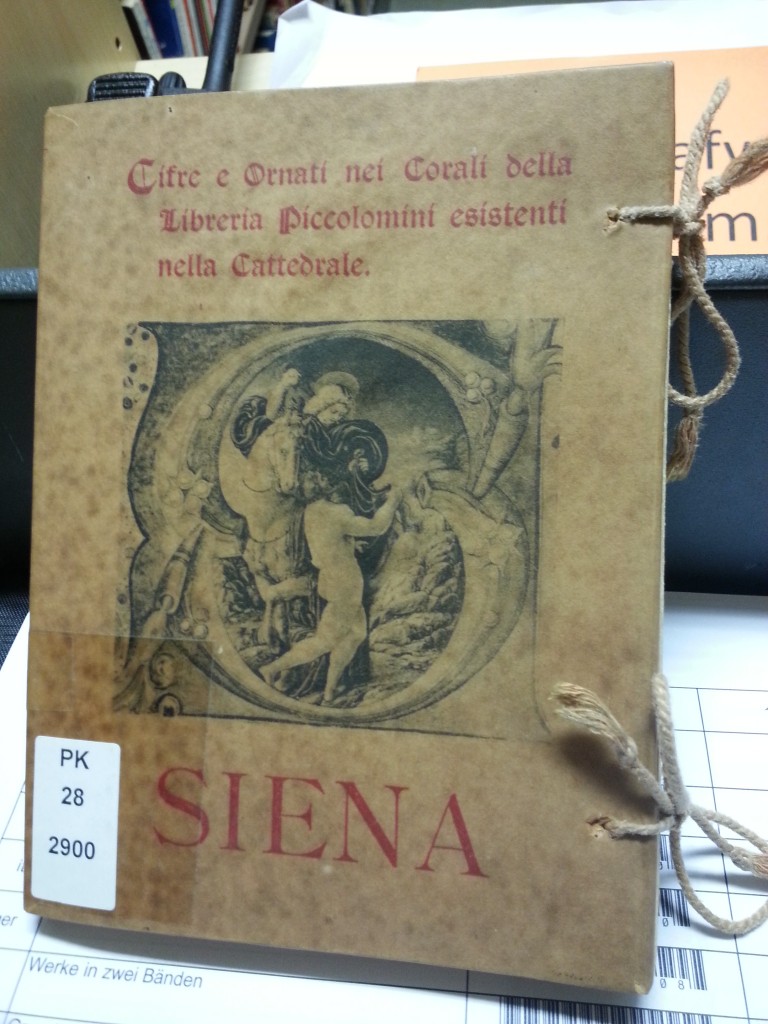 And my greatest discovery: an English catalogue of an exhibition at the Royal Academy from 1908: “Exhibition of works by the old masters and by deceased masters of the British school including a collection of water colours” (yes, this is one big main title). 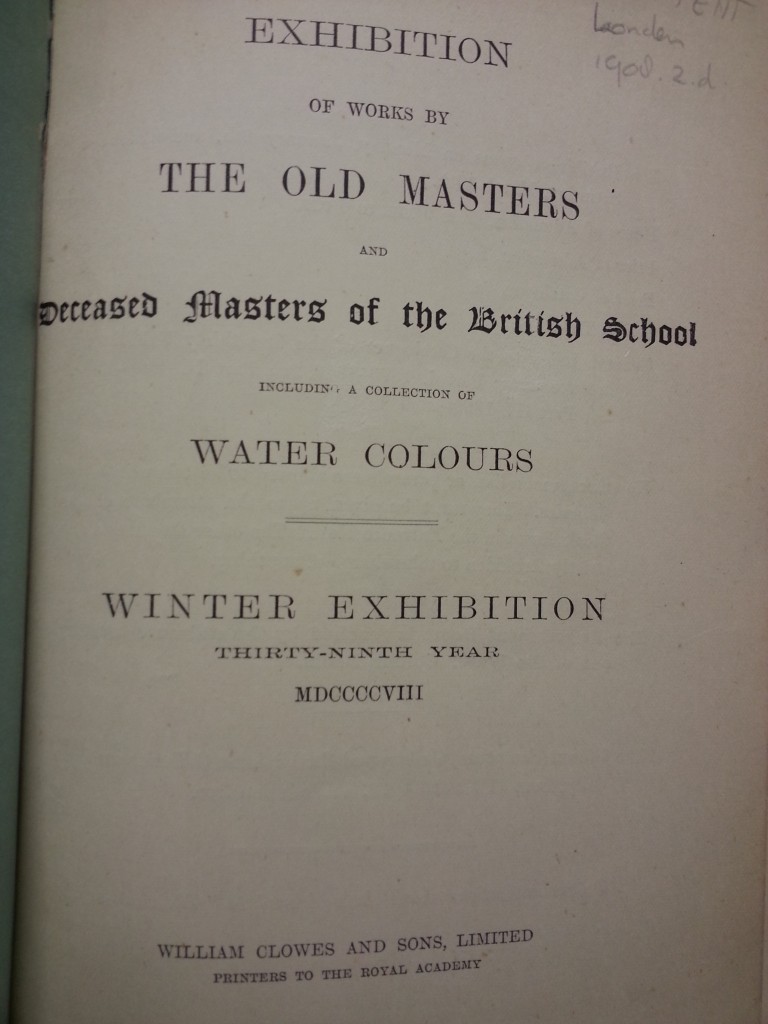 But the book itself is not the discovery. It’s what is hidden inside the book. A handwritten folded sheet of paper, with letterhead “Hewell Grange. Bromsgrove.” (which is a 19th century country house, seat of the Earls of Plymouth, now a prison), dated Nov. 23. 192. Yes, there seems to be a digit missing there. Or is it “/92”? Which would not be logical in an exhibition catalogue from 1908. It definitely looks like a fountain pen was used. It also has some kind of diagonal stamp in the upper left corner “TELEGRAPH OFFICE FINSTALL”. Finstall is a village 3 km from Hewell Grange. 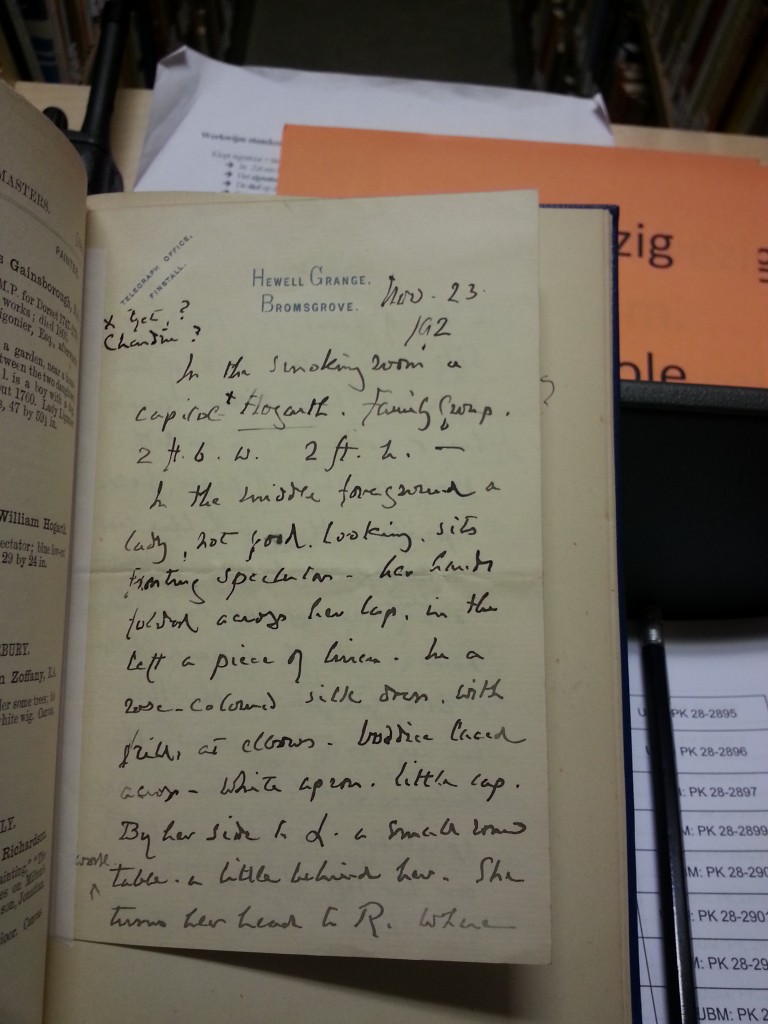 The paper also has a pencil sketch of a group of people, probably a copy of a painting. At first I thought it was a letter, but looking more closely it seems to be a personal impression and description of a painting. There are similar handwritings on the pages of the book itself.
I left the handwritten note where I found it. It’s still there. You can request the book for consultation and see for yourself. 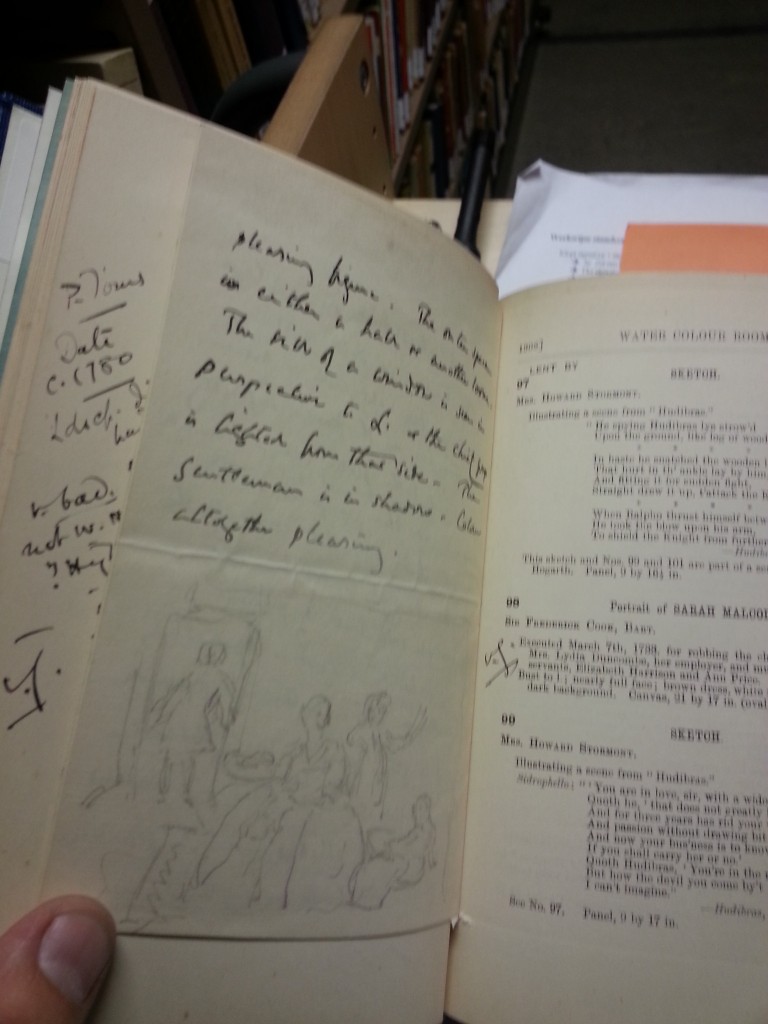 Conclusions
End users, patrons, customers or whatever you want to call them, can’t find books that the library owns if they are not catalogued. They can find bibliographic descriptions of the books elsewhere, but not the information needed to get a copy at their own institution. This confirms the assertion that holdings information is very important, especially in a library linked open data environment.

The majority of books in an academic library are never requested, consulted or borrowed. Most outdated textbooks can be removed without any problem.

There are a lot of cultural heritage treasures hidden in the stacks that should be made accessible to the general public and humanities researchers in a more convenient way.

In the absence of open stacks and full text search for printed books and journals it is crucial that the content of books, and articles too, is described in a concise, yet complete way. Not only formal cataloguing rules and classification schemes should be used, but definitely also expert summaries and end user generated tags.

Even with cataloguing rules it can be very hard for cataloguers to decide what the actual titles, subtitles and authors of a book are. The best source for correct title metadata are obviously the authors, editors and publishers themselves.

All in all, a very informative experience.

2 thoughts on “A day between the stacks”