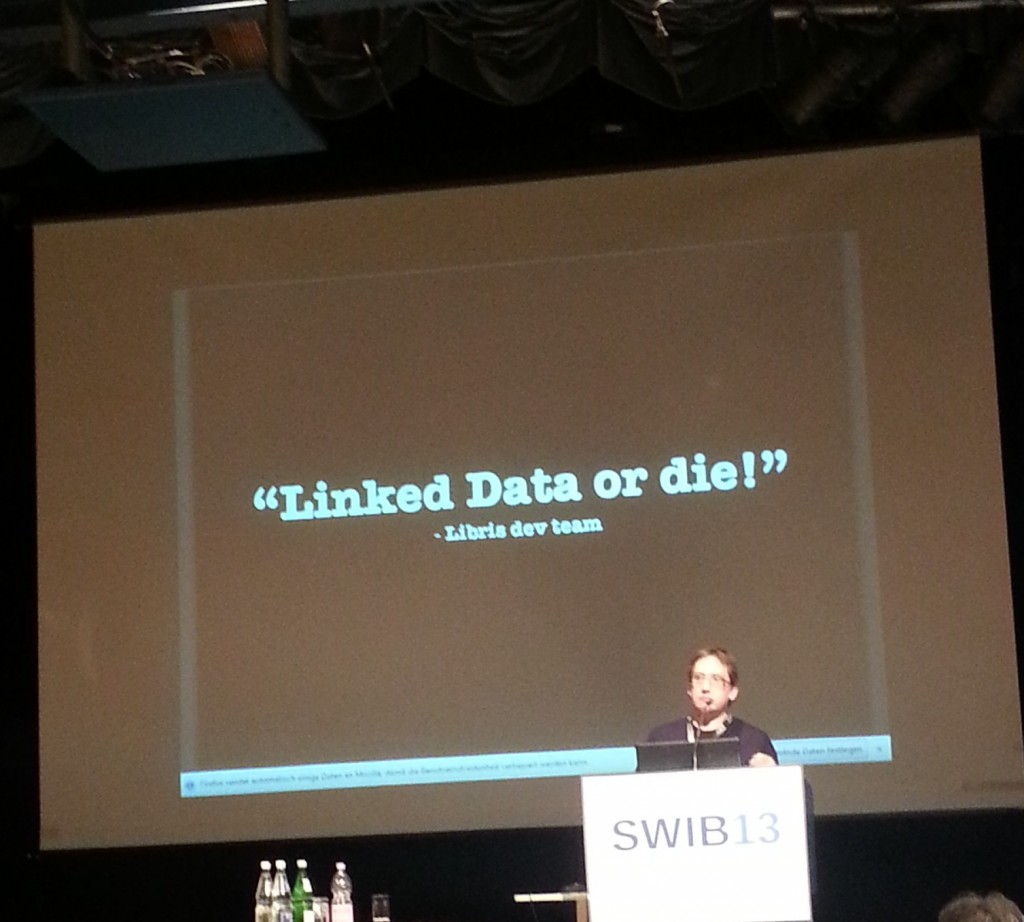 Paraphrasing some of the challenges proposed by keynote speaker Dorothea Salo, the unofficial theme of the SWIB13 conference in Hamburg might be described as “No more ontologies, we want out of the box linked data tools!”. This sounds like we are dealing with some serious confrontations in the linked open data world. Judging by Martin Malmsten’s LIBRIS battle cry “Linked data or die!” you might even think there’s an actual war going on.

Looking at the whole range of this year’s SWIB pre-conference workshops, plenary presentations and lightning talks, you may conclude that “linked data is a technology that is maturing” as Rurik Greenall rightly states in his conference report. “But it has quite a way to go before we can say this stuff is ready to roll out in libraries” as he continues. I completely agree with this. Personally I got the impression that we are in a paradoxical situation where on the one hand people speak of “we” and “community”, and on the other hand they take fundamentalist positions, unconditionally defending their own beliefs and slandering and ridiculing other options. In my view there are multiple, sometimes overlapping, sometimes irreconcilable “we’s” and “communities”. Sticking to your own point of view without willingness to reason with the other party really does not bring “us” further.

This all sounds a bit grim, but I again agree with Rurik Greenall when he says that he “enjoyed this conference immensely because of the people involved”. And of course on the whole the individual workshops and presentations were of a high quality.

Before proceeding to the positive aspects of the conference, let me first elaborate a bit on the opposing positions I observed during the conference, which I think we should try to overcome.

Developers disagree on a multitude of issues:
Formats
Developers hate MARC. Everybody seems to hate RDF/XML, JSON-LD seems to be the thing for RDF, but some say only Turtle should be used, or just JSON.
Tools and languages
Perl users hate Java, Jave users hate PHP, there’s Python and Ruby bashing.
Ontologies
Create your own, reuse existing ones, yes or no upper ontologies, no ontologies but usable tools.
Operating systems
Windows/UNIX/Linux/Apple… it’s either/or.
Open source vs. commercial software
Need I say more?
Beer
Belgians hate German beer, or any foreign beer for that matter.
(Not to mention PDF).

OK, I hope I made myself clear. The point is that I have no problem at all with having diverse opinions, but I dislike it when people are convinced that their own opinion is the only right one and refuse to have a conversation with those who think otherwise, or even respect their choices in silence. The developer “community” definitely has quite a way to go.

Apart from these internal developer disagreements I noticed, there is the more fundamental gap between developers and users of linked open data. By “users” I do not mean “end users” in this case, but the intermediary deployers of systems. Let’s call them “libraries”.
Linked Data developers talk about tools and programming languages, metadata formats, open source, ontologies, technology stacks. Librarians want to offer useful services to their end users, right now. They may not always agree on what kind of services and what kind of end users, and they may have an opinion on metadata formats in systems, but their outlook is slightly different from the developers’ horizon. It’s all about expectations and expectation management. That is basically Dorothea Salo’s keynote’s point. Of course theoretical, scientific and technical papers and projects are needed to take linked data further, but libraries need linked data tools, focused on providing new services to their end users/customers in the world of the web, that can easily be implemented and maintained.
In this respect OCLC’s efforts to add linked data features to WorldCat is praiseworthy. OCLC’s Technology Evangelist Richard Wallis presented his view on the benefits of linked open data for libraries, using Google’s Knowledge Graph as an example. His talk was mainly focused at a librarian audience. At SWIB, where the majority of attendees are developers or technology staff, this seemed somewhat misplaced. By chance I had been present at Richard’s talk at the Dutch National Information Professional annual meeting two weeks earlier, where he delivered almost the same presentation for a large room full of librarians. There and then that was completely on target. For the SWIB audience this all may have been old news, except for the heads up about OCLC’s work on FRBR “Works” BIBFRAME type linked data which will result in published URIs for Works in WorldCat.
An important point here is that OCLC is a company with many library customers worldwide, so developments like this benefit all of these libraries. The same applies to customers of one of the other big library system vendors, Ex Libris. They have been working on developing linked data features for their so called “next generation” tools since some time now, in close cooperation with the international user groups’ Linked Open Data Special Interest Working Group, as I explained in the lightning talk I gave. Also open source library systems like Koha are working on adding linked open data features to their tools. It’s with tools like these, that reach a large number of libraries, that linked open data for libraries can spread relatively quickly.

In contrast to this linked data broadcasting, the majority of the SWIB presentations showed local proprietary development or research projects, mostly of high quality notwithstanding. In the case of systems or tools that were built all the code and ontologies are available on GitHub, making them open source. However, while it is commendable, open source on GitHub doesn’t mean that these potentially ground breaking systems and ontologies can and will be adopted as de facto standards in the wider library community. Most libraries, both public and academic, are dependent on commercial system and content providers and can’t afford large scale local system development. This also applies up to a point to libraries that deploy large open source tools like Koha, I presume.
It would be great if some of these many great open source projects could evolve into commonly used standard tools, like Koha, Fedora and Drupal, just to name a few. Vivo is another example of an open source project rapidly moving towards an accepted standard. It is a framework for connecting and publishing research information of different nature and origin, based on linked data concepts. At SWIB there was a pre-conference “VivoCamp”, organised by Lambert Heller, Valeria Pesce and myself. Research information is an area rapidly gaining importance in the academic world. The Library of the University of Amsterdam, where I work, is in the process of starting a Vivo pilot, in which I am involved. (Yes, the Library of the University of Amsterdam uses both commercial providers like OCLC and Ex Libris, and many open source tools). The VivoCamp was a good opportunity to have a practical introduction in and discussion about the framework, not in the least by the presence of John Fereira of Cornell University, one of the driving forces behind Vivo. All attendees (26) expressed their interest in a follow-up.
Vivo, although it may be imperfect, represents the type of infrastructure that may be needed for large scale adoption of linked open data in libraries. PUB, the repository based linked data research information project at Bielefeld University presented by Vitali Peil, is aimed at exactly the same domain as Vivo, but it again is a locally developed system, using another smaller scale open source framework (LibreCat/Catmandu of Bielefeld, Ghent and Lund universities) and a number of different ontologies, of which Vivo is just one. My guess is that, although PUB/LibreCat might be superior, Vivo will become the de facto standard in linked data based research information systems.

Instead of focusing on systems, maybe the library linked data world would be better served by a common user-friendly metadata+services infrastructure. Of course, the web and the semantic web are supposed to be that infrastructure, but in reality we all move around and process metadata all the time, from one system and database to another, in order to be able to offer new legacy and linked data services. At SWIB there was mention of a number of tools for ETL, which is developer jargon for Extract, Transform, Load. By the way, jargon is a very good way to widen the gap between developers and libraries.
There were pre-conference workshop for the ETL tools Catmandu and Metafacture, and in a lightning talk SLUB Dresden, in collaboration with Avantgarde Labs, presented a new project focused on using ETL for a separate multi-purpose data management platform, serving as a unified layer between external data sources and services. This looks like a very interesting concept, similar to the ideas of a data services hub I described in an earlier post “(Discover AND deliver) OR else”. The ResourceSync project, presented by Simeon Warner, is trying to address the same issue by a different method, distributed synchronisation of web resources.

One can say that the BIBFRAME project is also focused on data infrastructure, albeit at the moment limited to the internal library cataloguing workflow, aimed at replacing MARC. An overview of the current state of the project was presented by Lars Svensson of the German National Library.
The same can be said for the National Library of Sweden’s new LIBRIS linked data based cataloguing system, presented by Martin Malmsten (Decentralisation, Distribution, Disintegration – towards Linked Data as a First Class Citizen in Libraryland). The big difference is that they’re actually doing what BIBFRAME is trying to plan. The war cry “Linked data or die!” refers to the fact that it is better to start from scratch with a domain and format independent data infrastructure, like linked data, than to try and build linking around existing rigid formats like MARC. Martin Malmsten rightly stated that we should keep formats outside our systems, as is also the core statement of the MARC-MUST-DIE movement. Proprietary formats can be dynamically imported and exported at will, as was demonstrated by the “MARC” button in the LIBRIS user interface. New library linked data developments will have to coexist with the existing wider library metadata and systems environment for some time.
Like all other local projects, the LIBRIS source code and ontology descriptions are available on GitHub. In this case the mere scope of the National Library of Sweden and of the project makes it a bit more plausible that this may actually be reused on a larger scale. At least the library cataloguing ontology in JSON-LD there is worth having a look at.
To return to our starting point, the LIBRIS project acknowledges the fact that we need actual tools besides the ontologies. As Martin Malmsten quoted: “Trying to sell the idea of linked data without interfaces is like trying to sell a fax without the invention of paper”.

The central question in all this: what is the role of libraries in linked data? Developers or implementers, individually or in a community? There is obviously not one answer. Maybe we will know more at SWIB14. Paraphrasing Fabian Steeg and Pascal Christoph of hbz and Dorothea Salo, next years theme might be “Out of the box data knitting for great justice”.

One thought on “Linked data or die!”