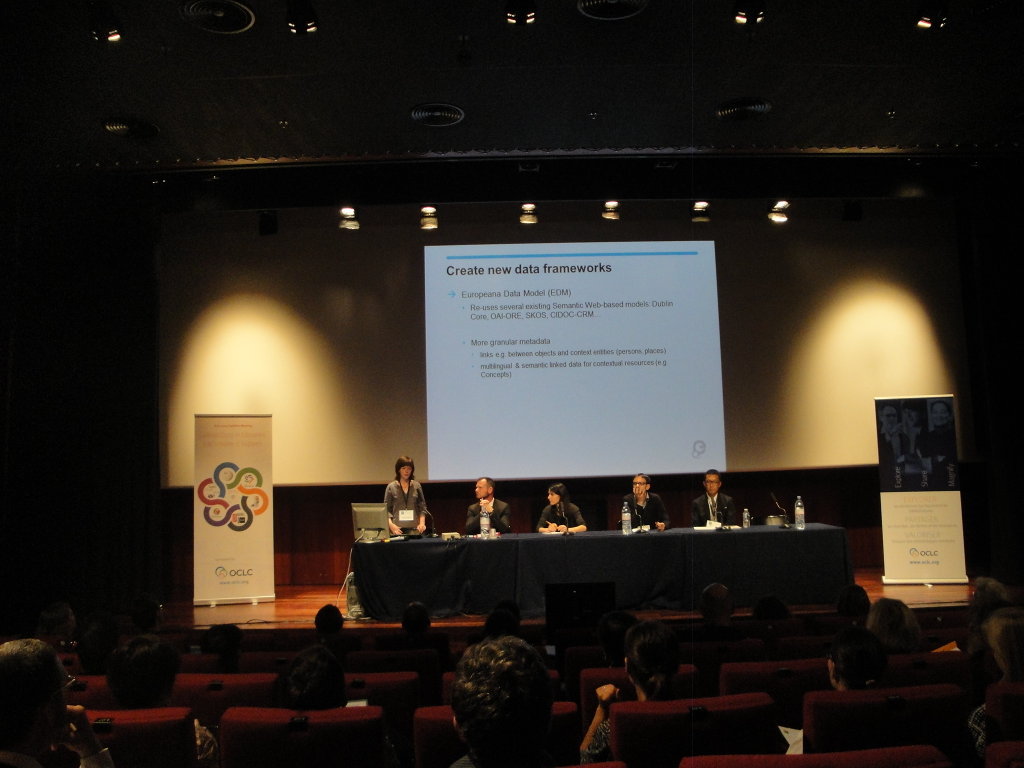 On August 14 the IFLA 2014 Satellite Meeting ‘Linked Data in Libraries: Let’s make it happen!’ took place at the National Library of France in Paris. Rurik Greenall (who also wrote a very readable conference report) and I had the opportunity to present our paper ‘An unbroken chain: approaches to implementing Linked Open Data in libraries; comparing local, open-source, collaborative and commercial systems’. In this paper we do not go into reasons for libraries to implement linked open data, nor into detailed technical implementation options. Instead we focus on the strategies that libraries can adopt for the three objectives of linked open data, original cataloguing/creating of linked data, exposing legacy data as linked open data and consuming external linked open data. Possible approaches are: local development, using Free and open Source Software, participating in consortia or service centres, and relying on commercial vendors, or any combination of these. Our main conclusions and recommendations are: identify your business case, if you’re not big enough be part of some community, and take lifecycle planning seriously.

The other morning presentations provided some interesting examples of a number of approaches we described in our talk. Valentine Charles presented the work in the area of aggregating library and heritage data from a large number of heterogeneous sources in different languages by two European institutions that de facto function as large consortia or service centres for exposing and enriching data, Europeana and The European Library. Both platforms not only expose their aggregated content in web pages for human consumption but also as linked open data, besides other so called machine readable formats. Moreover they enrich their aggregated content by consuming data from their own network of providers and from external sources, for instance multilingual “value vocabularies” like thesauri, authority lists, classifications. The ideas is to use concepts/URIs together with display labels in multiple languages. For Europeana these sources currently are GeoNames, DBPedia and GEMET. Work is being done on including the Getty Art and Architecture Thesaurus (AAT) which was recently published as Linked Open Data. Besides using VIAF for person authorities, The European Library has started adding multilingual subject headings by integrating the Common European Research Classification Scheme, part of the CERIF format. The use of MACS (Multilingual Access to Subjects) as Linked Open Data is being investigated. This topic was also discussed during the informal networking breaks. Questions that were asked: is MACS valuable for libraries, who should be responsible for MACS and how can administering MACS in a Linked Open Data environment best be organized? Personally I believe that a multilingual concept based subject authority file for libraries, archives, museums and related institutions is long overdue and will be extremely valuable, not only in Linked Open Data environments.

The importance of multilingual issues and the advantages that Linked Open Data can offer in this area were also demonstrated in the presentation about the Linked Open Authority Data project at the National Diet Library of Japan. The Web NDL Authorities are strongly connected to VIAF and LCSH among others.

The presentation of the Linked Open Data environment of the National Library of France BnF (http://data.bnf.fr) highlighted a very interesting collaboration between a large library with considerable resources in expertise, people and funding on the one hand, and the non-library commercial IT company Logilab. The result of this project is a very sophisticated local environment consisting of the aggregated data sources of the National Library and a dedicated application based on the free software tool Cubicweb. An interesting situation arose when the company Logilab itself asked if the developed applications could be released as Open Source by the National Library. The BnF representative Gildas Illien (also one of the organizers of the meeting together with Emmanuelle Bermes) replied with considerations about planning, support and scalability, which is completely understandable from the perspective of lifecycle planning.

With all these success stories about exposing and publishing Linked Open Data, the question always remains if the data is actually used by others. It is impossible to incorporate this in project planning and results evaluation. Regarding the BnF data this question was answered in the presentation about Linked Open Data in the book industry. The Electre and Antidot project uses linked open data form among others data.bnf.fr.

The afternoon presentations were focused on creating, maintaining and using various data models, controlled vocabularies and knowledge organisation sysems (KOS) as Linked Open Data: The EDM Europeana data Model, UNIMARC, MODS. An interesting perspective was presented by Gordon Dunsire on versioning vocabularies in a linked data world. Vocabularies change over time, so an assignment of a URI of a certain vocabulary concept should always contain version information (like timestamps and/or version numbers) in order to be able to identify the intended meaning at the time of assigning.

The meeting was concluded with a panel with representatives of three commercial companies involved in library systems and Linked Open Data developments: Ex Libris, OCLC and the afore-mentioned Logilab. The fact that this panel with commercial companies on library linked data took place was significant and important in itself, regardless of the statements that were made about the value and importance of Linked Open Data in library systems. After years of dedicated temporarily funded proof of concept projects this may be an indication that Linked Open Data in libraries is slowly becoming mainstream.